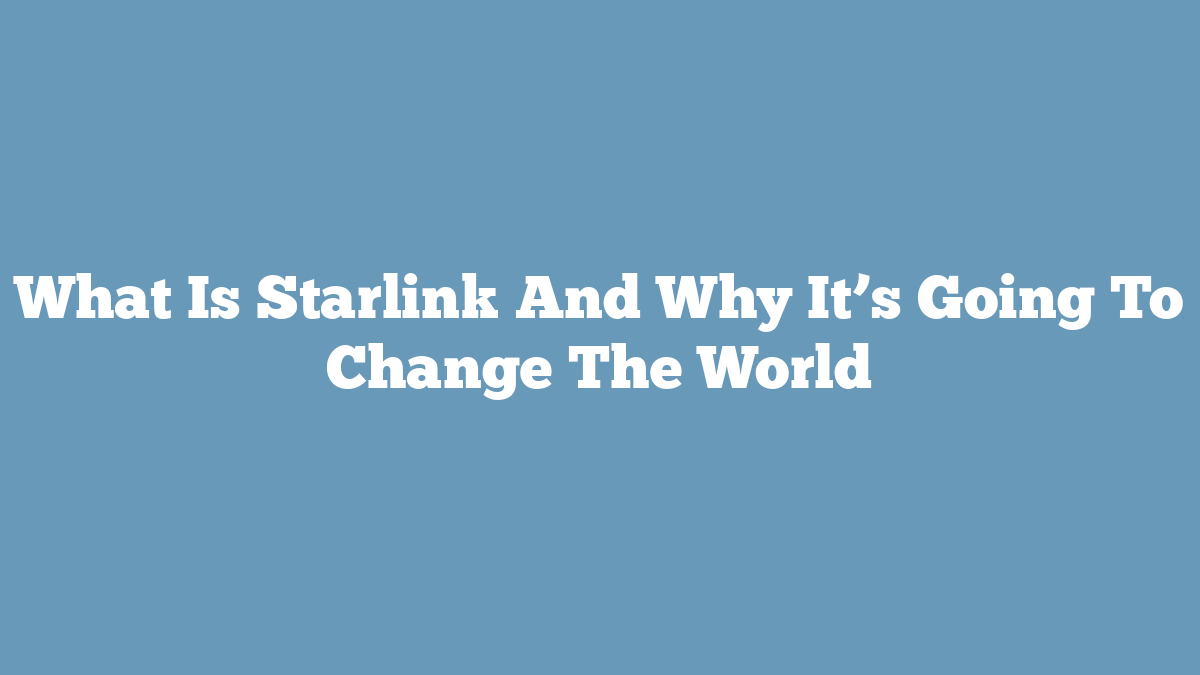 What is Starlink? What if there was a way to get online that didn’t involve phone lines, cable TV, or cell towers? That’s the promise of Starlink, an ambitious new project by Elon Musk that would use a network of thousands of small satellites to provide high-speed internet access to everyone on Earth.

Starlink is still in development, but when it’s completed it will be the largest satellite constellation ever created. It’s going to change the way we connect to the internet, and possibly even the way we live our lives.

Starlink is a satellite-based internet access system. Instead of relying on cables, cell towers, and existing satellites to provide internet access, Starlink will use its own network of thousands of small satellites orbiting the Earth. These satellites will be able to communicate with each other and form a mesh network that can transmit data from anywhere in the world. The goal is to provide reliable high-speed wifi signals that are available even in rural or remote areas where traditional internet connections are unavailable.

In addition to providing internet access, Starlink could also revolutionize space exploration and communication. The constellation would enable faster data transmission for spacecrafts and potentially create an entirely new field of research for scientists working on deep space exploration projects.

The implications of Starlink are huge. It has the potential to connect people in parts of the world where internet access is limited or nonexistent and to revolutionize how we communicate with each other and explore space.

We may not know what the future holds, but one thing is certain – Starlink will be at the forefront of it all.

Starlink offers connectivity to everyone, everywhere. This revolutionary technology uses a network of satellites to provide access to high-speed internet for remote and hard-to-reach locations. With Starlink, users can surf the web, streaming videos or audio, download files, and even video chat with no lag time or connectivity issues – all from virtually any area on the globe. No matter how rural or isolated the environment, Starlinks ensures that anyone can access the same connectivity level provided in larger cities. It is truly game-changing and enables world-wide connectivity on an unprecedented scale.

People can vote with their feet and work from anywhere. Including maybe low earth orbit, high earth orbit, the Moon or Mars… or even better a moon of Mars!

Starlink is an ambitious project, and it’s still in the early stages. There are many technical, logistical, and financial challenges that need to be addressed before the system can become a reality.

However, with Elon Musk at the helm, anything is possible. If Starlink succeeds, it could change the way we use the internet and revolutionize our understanding of space exploration. We can only wait and see what amazing things this project brings to our lives in the years ahead.

Ultimately, Starlink has enormous potential to revolutionize how humanity connects with each other and explores space. It will enable high-speed internet access for everyone on Earth, no matter where they live or how remote their location.

It has already shown great potential with it’s intended use and is single-handedly changing the rules of war. Ukraine would not be in holding its own if not for Starlink. Imagine the other unintended side effects we’ll see in the coming years.

The CyberData Network Switch You Didn’t Know You Wanted

Starlink Roof Mount The Best Way To Use Your Dishy

The Best Wifi Extender For Xfinity In Stock

The Best Wifi Extender for Starlink

If an item is: "Out of stock" - Supply chain issues | "Available on backorder" - We can get in x days | "In stock" - Ships next business day Dismiss